It's as dark as dark can be, probably

This year has been downright weird in just about every way, and writing papers is no exception. Before the pandemic I was working on a nice little paper about Ultra Diffuse Galaxies, which I got carried away with and made everything much more difficult for myself, but then lockdown hit quite suddenly and I resorted to happily recoding FRELLED. That's nearing completion, at least in the core aspects.

As working from home transitioned from weird to normal to actually desirable, observations with Arecibo, once defying the general trend by continuing to operate relatively normally, came to a literal crashing halt. But other telescopes are still managing. Michal Bilek, a colleague from Prague who's now based in Strasbourg, was fortunate enough to get some extra time on a 1.4m telescope in Serbia, and he had the idea of doing some really deep imaging of those optically dark Virgo clouds I love being the cheerleader for so much*.

*Only without any pom-poms, which is frankly disappointing.

Now you might be wondering what a 1.4m optical telescope can possibly contribute to the research of hydrogen clouds discovered with a 305m radio telescope. Well, for one thing it's a lot easier to get multiple hours of integration time on a 1.4m optical telescope for a single source than a 305m dish, for which we only had the equivalent for 5 minutes on-source. This means we can get really high sensitivity. And while for various reasons I strongly suspect there's no optical counterpart to be found, the only way to verify that is to go and look.

We chose one particular target since it was among the brightest of the Virgo clouds and has a nice high velocity width, although it's not outstandingly different from the others. During the discussion I learned just how difficult it is to get really deep optical data, which suffice to say is a lot more of a complex process than just doing a really long exposure. There are all kinds of post-observation procedures that need to be applied, most of which I don't understand (although one, injecting fake sources to estimate the sensitivity, is pleasingly similar to measuring radio tails).

The bottom line is that we can indeed get extremely high sensitivity, constraining the the object to have significantly less mass in stars than gas (by at least a factor three). We also didn't find any sign of optical disturbances in the nearby galaxies which might have suggested that this object is just another boring old bit of tidal debris. Although it's unlikely that a galaxy could have a nice stellar stream without an accompanying hydrogen tail, it's by no means impossible in an environment as chaotic as the Virgo cluster. So this adds, tenatatively, to the idea that it's a genuine dark galaxy, a scenario which has no problem explaining the observations.

I say "tenatatively" since this does rely a bit on statistics. Our previous simulations show that forming such objects is almost, but not quite, impossible. This makes it incredibly improbable - I would say even ruling it out pretty decisively - that all six such clouds are tidal debris, but we certainly can't make such a strong statement for each individual cloud. And there are a few short hydrogen tails in the surrounding region, but none are a good match, and the cloud would still be radically different from any other known tidal debris feature. So yes, tidal debris is a possibility, but in my view it's not terribly likely. Of course whether it's more likely that the cloud is actually a starless galaxy... well, that's another matter.

Basically, as usual, I'll be satisfied if people simply acknowledge that these clouds are weird. I don't much mind what they think they actually are - that is left to future research. For the time being, I'll continue cheerfully waving the metaphorical pom-poms for gas clouds that don't do anything until people give in and admit that they're interesting or everyone gets bored and gives up.

The blind HI survey Arecibo Galaxy Environment Survey (AGES) detected several unresolved sources in the Virgo cluster, which do not have optical counterparts in the Sloan Digital Sky Survey. The origin of these dark clouds is unknown.

Email ThisBlogThis!Share to TwitterShare to FacebookShare to Pinterest
Labels: Analysis, My papers

More on those galaxies which appear to lack dark matter. Hot on the heels of the recent simulations showing that dark matter can be tidally... 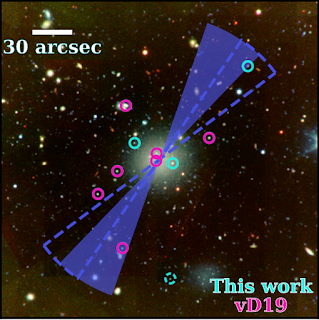